How to Remove a Broken Tap, Stud, bolt, or pressed in pin

A broken tap is harder than Woodpecker Lips.

That is because taps are made from high speed steel.

A tig welding machine with a foot pedal and a low amp start along with some tig rod like hastelloy w, 309, or 312 stainless rods, is  the ticket for removing taps, studs, broken bolts, and pressed in pins.

Sharpen that tungsten before attempting to remove that broken tap 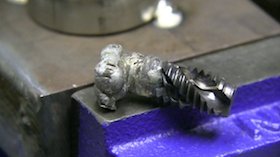 It helps a bunch to use a sharp tungsten but also use the smallest electrode that will do the job.  That will help prevent arc wandering and missed arc starts.

Usually a 1/16" (1.6mm) tungsten will handle enough amperage  to remove most taps, bolts, etc.  It does not take all that much heat to puddle the top of a tap or bolt.

Set your amperage to around 90 and use the foot pedal to soak some heat into the tap.

Soaking some heat into the broken tap will help to soften the tap...and it needs to be softened so it wont snap.

After soaking heat for several seconds...like at least 10 -15 seconds, add some rod.

I used hastelloy W in this video because I have quite a lot of it.

But 309 or 312 stainless rod works pretty well too and is waaaay cheaper.

Hastelloy W is up over 100 dollars per pound now while 309 stainless tig rods are less than 15 dollars a pound.

IF you have never done this type of weld buildup before, its pretty easy to get some practice....just get a bolt and practice building up a mushroom head on it in a shape thats easy to grab with vise grips or that is easy to weld a nut on it. 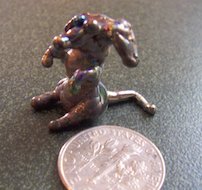 Back when I shot the video on removing an exhaust stud, I got a lot of feedback on how candle wax has a much higher flashpoint than most other lubricants and therefore, works better for removing a broken exhaust stud...I tried it and it works.

For exhaust manifolds , which are typically cast iron, it can help a lot to heat the surrounding metal so that it expands and helps break up the bound up threads.

why you need a foot pedal

doing this type of buildup can be tedious.

Any extra movement caused by a torch mounted amp control is not helpful.

Also, you need as much amperage control as possible.

You also need a tig welder that has  a 10 amp low end....especially for those little 10-32 taps.  Those little buggers require some finesse...and not much amperage.