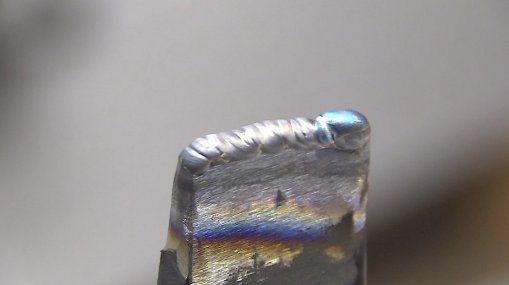 What is hard facing ?

Hardfacing is also known as hard surfacing and involves adding harder, tougher, or more wear resistance material to a part ...usually by welding.

Sometimes those wear resistance or impact resistant properties in hardfacing are only needed on the surface while the base metal remains softer and more ductile and less likely to fail.

Admixture is dilution.  When a filler metal is used to weld a base metal, the resulting deposited metal is not always 100% filler metal. Its a mixture of base and filler and that can affect hardness.

that is why I deposited multiple beads on the tip of the chipping hammer.

What kind of steel is a chipping hammer made from?

who knows?  I guess China knows...they dont advertise it.  But it is most likely something like 1045 steel.

The tips of most chipping hammers get really dull really quick.

But there is an easy fix

And you dont need to buy expensive hard facing rod either.

you just need something somewhat harder than a chipping hammer.

How about a small dull drill bit?

I have plenty of those.

First I need to grind the paint off the tips.
Because I hate the smell of burning paint, I am going to remove all the paint.

TIG welding goes so much better when the metal is super clean.

I decided to grind a flat spot on each end to allow for a nice base of drill bit metal.

And  after a thorough sanding and a wipe down with acetone, I just welded a bead right on the flat spot of the flat end of the chipping hammer.

This would be even easier if I clamped the chipping hammer head against a piece of aluminum  or copper backing.

For the pointed end I thought it would be fun to just sculpt it by using really lower and lower amperage.

Now to grind it off and sharpen it.

I was careful not to overheat things because that can remove hardness.

Judging by the simple spring loaded punch test, those drill bit beads are as hard as woodpecker lips.

The chipping hammer was just as soft as the aluminum bar but the tips were much harder...just what I wanted.

The welds were so hard, I could barely get the punch to make a dot.

I tried it out on a 7018 fillet weld and it worked great. 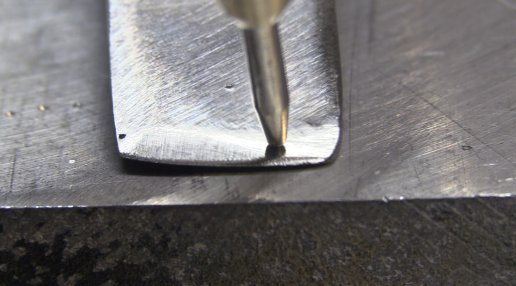