Something I noticed at the 2009 Fabtech and welding exp in Chicago was that welding fume extractors and dust collector units were much more prevalent than in earlier years.

and I think I know why.

Have you heard? It’s a couple years old now, but OSHA tightened up on the exposure limits for hexavalent chromium big time.

Like what used to be the size of a basketball hoop is now the size of the eye of a needle…and welding fume extractors are one way for employers to comply.

There were a bunch of vendors at the 2009 welding show demonstrating welding fume filtration systems but one particular fume extractor that caught my eye was made by a company called Nederman.

Based in Sweden, Nederman is a leader in welding fume extractors and dust collectors. They also make hose reels, and a bunch of other industrial stuff.

The 3 welding fume extractors on display were: 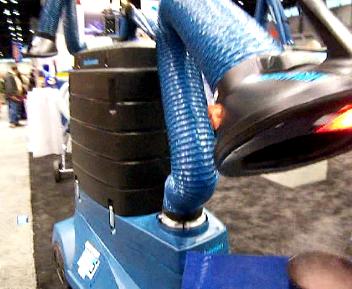 A portable unit called a Filter Cart with molded plastic parts and an integrated spotlight on the snorkel sucker. This portable fume extractor runs off of 120 volt power and features a swiveling snorkel arm and swivel casters on the front with large fixed wheels on the rear for good maneuverability.

The integrated lamp is a great idea because after all, any area you want to suck smoke away from is a weld area that needs to be seen… but I am hesitant to brag on the internal hardware for the fume extractor arm. It looks good, and is sleek but I think it’s a bad idea. Mostly because I have had really bad experiences with internal hardware on extractor arms breaking from fatigue and also building up dust and getting clogged.

(I even remember replacing a bunch of internal parts that were made of 3003 aluminum with some 4130 chromoly plates for a dust collection system where I worked that had about 30 snorkels. They just didn’t hold up to the constant repositioning the welders did with every job.)

Most extractor arms are now made with the supporting hardware on the outside for better accessibility and also to improve the flow on the inside.

Another one of Nedermans fume collector products was a wall mounted filter canister unit that can be used with a central fume extraction system or any number of other methods. 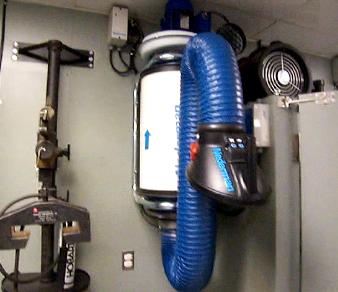 A mobile welding training station on display utilized these Nederman Canister filters installed on wall mounted brackets with a blower motor and extractor arm mounted right next to it for a really compact fume extractor unit for each small welding booth.

It was a tight looking system that fit nicely in the really small welding training booths.

The last and most versatile fume extraction unit I saw at the Nederman booth was called the Filter Box Modular Extraction /Filter System. This unit is a box design that can be used as a portable roll around unit, or a wall mounted unit with single or dual extractor arms, or as a ceiling mounted fume extractor. 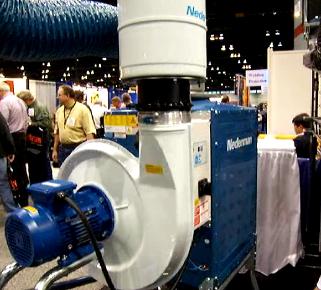 Self cleaning long life filters with a bucket on the bottom for easy emptying of debris seemed like a simple yet very effective and useful design. Also, the externally mounted motor and blower were able to be right-sized for the application.

Like I said , this was the most versatile fume extractor I saw. 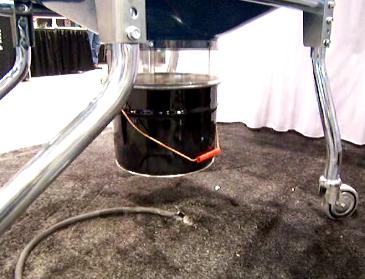 What really impressed me, was the plain metal bucket fastened to the bottom to empty the debris. They could have designed a sheet metal tray that might have looked more sleek, but the designers chose to keep it simple and effective…

In case you haven’t figured it out yet, I am all about simple and effective.