Get yourself a Portable Welding Screen 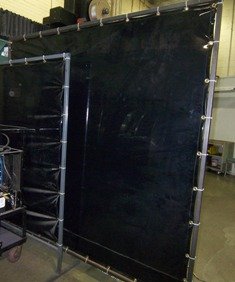 When you are welding near other people, it is just plain rude and obnoxious not to have a portable welding screen in place. Getting flashed all day out of your peripheral vision is dangerous and can have long term effects.

With welding screens and curtains so readily available in all colors and all sizes, there is just no reason not to make a Welding screen and use it whenever there is a possibility of someone getting flashed by your arc.

I remember a long time ago I was working a construction job as a pipe welder. My fitter was trying to fit for 2 welders...trying to keep me along with another welder busy.

The other welder and I were both using Rigid chain pipe vises just a few feet apart and my fitter was holding parts for me to tack, and then while I was welding those parts, he would turn around and help the other welder tack his parts together. That was a horrible idea. The flash off the walls along with the occasional arc he was seeing out of the corner of his eye gave him flash burns so bad that when I stopped to pick him up for work the next morning, he stumbled out to the car with red eyes that were full of gunk and told me to just go on without him. He had been up all night nursing flash burns.

That sucked! I felt really stupid for letting him get flashed like that. I should have just refused to work under those conditions and insisted that the other welder find another fitter.

If we would have stopped long enough to fabricate a welding screen, Things would have been different....and a lot safer for him. We could have easily built one out of scrap electrical conduit or Unistrut or something.... Probably could have done it in a an hour.

When a friend of mine set up a welding area in his machine shop, I remembered my old fitters flash burns....So I made a very large welding screen so that when welding was going on, the machinists would not have to worry about getting flashed.

We used a see thru orange welding screen like the curtains sold by PVCstrip.com.

That way the arc was shielded and we could still see thru it. Its much better to be able to see thru a welding curtain to avoid walking out in front of a forklift or overhead crane carrying a load.

Anyone with a job shop or machine shop should do the same. Conduit works fine, pipe, square tubing, even PVC . You can order the welding screens that go inside the frame you build and get practically any size you want. They come with brass grommets along the outer edge so you can fasten them with zip ties and have it done in minutes.

Its the safe thing and the right thing to do for the safety of anyone who walks by while you are welding. Its also an OSHA requirement to make sure you have welding arcs properly shielded to prevent exposure to passers by.