The Hobart Trek 180 - The First Cordless Welder with Balls

Have you heard about the new Hobart Trek 180 Battery powered Mig Welder?

That’s right..,I said battery powered mig welder! No, its not like the ReadyWelder that needs a series of batteries or another welding machine for the power source.

…and its not like the old Solar brand battery powered mig welders that were a little on the wussy side.

It’s hotter than any 115volt mig welder you ever tried...i promise.

It even gives the Millermatic Passport a run for the money on 115 volt power.

But don’t be confused, this is not just another 115 volt mig welder. The Hobart Trek 180 is a battery powered portable welder that charges from a 115 volt receptacle or a cigarette lighter auto inverter.

It welds off the battery but when you plug it into a 115 volt outlet, you don’t have to worry about tripping the breaker with this thing because it gets its power from the batteries and the 115v circuit you plug into just charges it while it welds… the charger keeps up with most short welding jobs by putting it in faster than you can take it out.

Running off the battery alone, the Hobart Trek 180 is rated to weld about 100 inches before it times out. It is marketed to off road racers, 4 x 4 enthusiasts and the racing crowd in general.

Hobart is stepping out there on this one not really knowing if this thing is going to sell.

I will bet there is about a 50 % chance you have never even heard about it unless you frequent the Hobart forums. I heard about it from an inside scoop and then I saw it at the 2009 AWS welding expo. Then I got the chance to try one out and put it to the test…so that’s exactly what I did. 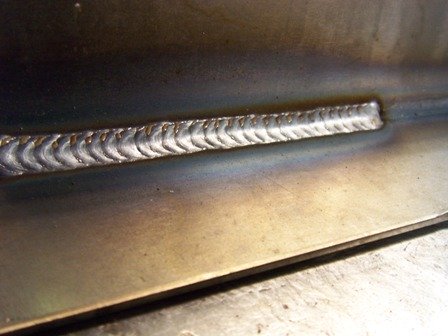 and then I read this on the welder's settings chart on the inside of the wire feeder door:

That gave me an idea… Would the Hobart Trek 180 would be able to weld a 3/8” thick multi pass v groove weld similar to a structural welding certification test running strictly off the battery?

But what the heck. I gave it a go.

The plates I welded were 3/8” thick with a 22.5 deg bevel. I gapped the plates about 1/8” and welded a root pass downhill with the Trek 180 set to 10 on voltage and 100 on the wire feed. (those were the recommended settings for 1/8” metal on the settings chart on the wire feed cover.)

The root pass went in pretty well. No big surprise. Open butt roots downhill don’t take much amperage. But this was only a 45 deg included angle..that’s kinda tight.

Second pass looked like it was going in fairly well but I was wishing for a little more punch. (I was still only running off the battery.)

Third pass was going fine, partly due to the good preheat from the first 2 passes…then half way through the last pass, the battery light came on and it quit welding.

Not too bad since I had already welded about 40 inches of weld on 18 and 14 ga steel.

The two and a half passes on the 3/8” thick v groove weld actually equated to a lot more inches of weld since a root pass is kind of slow and the other passes were weave passes.

I plugged the machine in to charge and in just a few minutes, it was ready to weld again so I finished the last half of the cover pass on the 3/” v groove weld test.

Man what a difference when I plugged it in. The last half of the cover pass went in nice …plenty of heat. 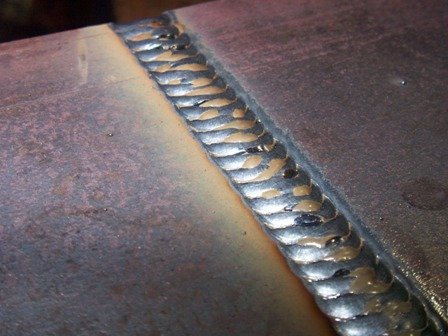 But would it bend? Only one way to find out

2 bend straps were cut from the last half of the weld and bent in a standard weld test bender made to American Welding Society AWS B4 specs…one root bend, one face bend. 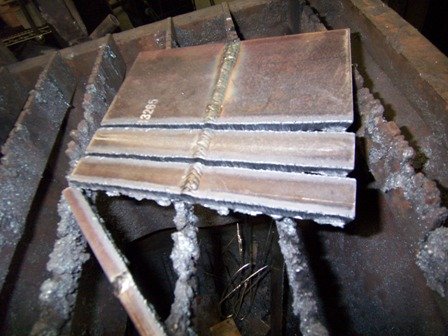 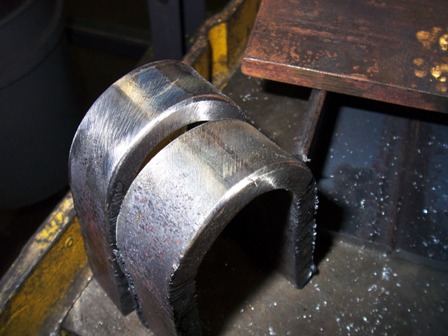 Here is what happened.

Root and face were clean. But there was a little bit of sidewall lack of fusion between the root pass and second pass. Not enough to make it open up on the bend test but still worth noting.

This test would have passed in most test shops. It passed AWS criteria which allows up to 1/8” open defect on the root or face surface.

It’s all in the video.

If you buy this machine, do yourself a favor and get Millers new ground clamp with dimpled copper jaws and shunt strap. Mig welders need good ground clamps!! Are you listening Hobart?? 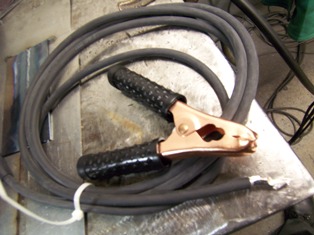 Changing polarity. This machine more so than others, will go from flux core to bare wire and back again. Changing polarity on the Hobart Trek 180 requires a socket or nut driver. 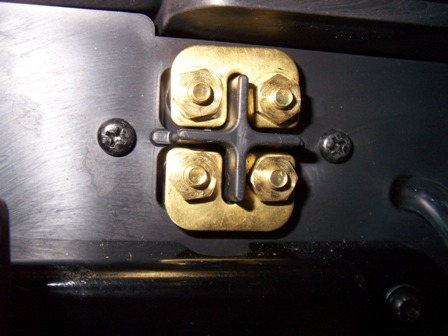 So If you are heading out on the trail with the Trek 180, do yourself a favor and change the polarity before you head out or you might just lose the little brass nuts in the dirt.

Duty Cycle… it is what it is. This machine was not designed to build railroad cars.It was designed for quick fixes.

The duty cycle is pretty low. But for off-road emergency repairs, duty cycle won’t mean much compared to not having to trailer out of a rock trail.

Other than those 3 things, I kind of liked it. It’s a solid machine made tough and with a smooth strong arc like a Miller Passport.

But…if you don’t need a portable mig welder, the Hobart Trek 180 is probably not for you.

For the money, you can get a decent 230v mig welder if portability is not a factor.

Oh yeah I almost forgot. I like the canvas bag on the side of the Hobart Trek. Just like the Millermatic Passport. It is just big enough to hold the stuff you need to carry with you like torch, ground, spools of wire, and tips.