If you are having trouble watching this Video on a DIY portable band saw stand , click here to view it at Welding-TV.com

Today's video is about building a Portable band saw stand.

Swag Off Road makes a really good stand for both Milwaukee, and DeWalt portable band saws...Problem is I dont have either.

I was actually considering buying a used Milwaukee portable band saw to make this video, but then I remembered I was low on cash and I remembered my machinist friend has a Porter Cable "portaband" and he agreed to let me build a stand for it.

Its going to come in very handy for quick cuts of round stock and for small sheet metal pieces.

I found a whole bunch of different ideas at different forums for Milwaukee, DeWalt, and even Harbor Freight, but none for a Porter Cable....So I was left to my own devices.

But I like that just fine...That means I get to do some jerry rigging.

I didnt want a saw stand where I had to remove screws and replace the stock before using the saw as a portable band saw.

And the Porter Cable standard stop is only held by 2 small screws so I dindt want the stop to have to support the weight of the saw.

So I designed mine to act like a cradle where I can remove it and put it back in the stand with no muss or fuss.

Also, in an effort to mix things up and be able to talk about more things. I used TIG, MIG, and Stick.

* Building a Cradle type stand for a portable band saw

I had some extra 1 1/2" square tubing as well as some 3/8" round bar scrap pieces so I figured that would have to do. The 1-1/2" 11 gauge sq tubing was overkill, but It didnt make any sense to go buy something specifically for this project because I am more concerned with function than looks or weight. ( and did I mention low on cash?)

In fact, the only thing I had to buy was some 3/8" thick weather stripping to act as a vibration dampener.

The Porter Cable portaband has a cast aluminum body with stiffener ribs cast throughout so to make a stand that used some type of clamping mechanism didn't seem like a good idea.

Cracking the aluminum body on my friends saw would really suck.

Also, I wanted a stand that would let me remove the saw and put it back quickly, time and time again.

So with all that in mind, I cut up a bunch of random pieces of 3/8" round stock because I kind of knew they would come in handy for tabs and stops.

Also, for the sake of the video, and to mix things up, I did some tig, mig , and stick.

pushing, pulling, straight drag, series of cursive e's, scoot forward 1/4" and pause.....all kinds of different techniques can work...find what works for you and perfect it.

you kind find all kinds of discussions (more like pissing contests) on the merits or drawbacks of using 309 stainless for carbon steel.

I am definitely not saying its ok to use 309 in place of er70 tig wire for coded welds.

what I am saying is that 309 is specified often for welding carbon steel pipe to stainless steel pipe in power plants where the welds are subjected to pressure, stress, vibration, and lots of thermal cycles.

So...I am pretty sure will be ok for my portaband stand.

Its a portaband stand for crying out loud..not the "Jesus nut" on the Space Shuttle.

( fyi...thats the nut that holds all things together)

309 has lots of chromium and therefore will prevent bubbling and porosity for tig welding hot rolled. ...It works. Its more expensive than er70 tig wire but works great for joining stainless to carbon and can be used for lots of other applications.

( lots of maintenance type rods advertised as being able to weld most anything are very similar to 309 stainless...or 312)

For building this portable band saw stand project, I plugged in the old school Lincoln tombstone style AC buzz box . I could have used the Everlast Combo unit..its a really good stick welder, but I wanted to go "old school" and simple for the video... ( and because there are still lots of folks who only have a AC buzz box to work with)

I thought I would try using some really small 1/16" stick rods to run a very small bead that would not warp the tubing. that turned out to be a bad idea. They didnt like the Tee joint. even though I ran them pretty hot.

for me, the puddle of a 6013 is much harder to discern than other rods, and if you weld too cold, or long arc, or hold your tongue on the wrong side of your mouth, you can wind up with the worm bead of slag in the middle of 2 beads and your pieces wont even be joined.

Also, decided to make some quick downhill welds with the 6011 rods. 6011 rods work great for downhill.

Well, thats it for today... I hope you enjoyed the Video on making a portable band saw stand.

Normally, I would not use 3 welding processes...tig, mig, and stick to do a little project like this.

But it did give me more to bump my gums about.

I definitely would have migged it for the sake of speed and also for less distortion.

In my experience, sometimes, in fact, most of the time, short circuit mig warps and draws less than tig or stick. Especially when you can do quick downhill welds that dont have to be gorilla strong.

...and If you are wondering what the white thing is on my finger on the TIG shots, 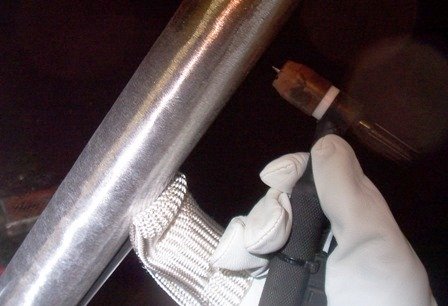