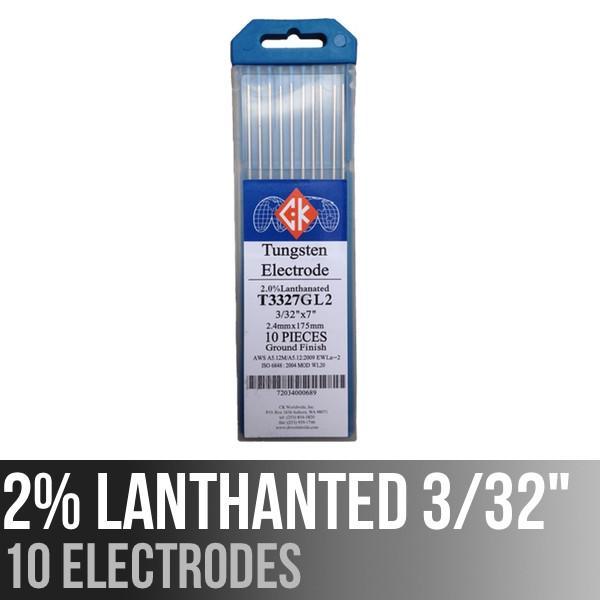 Ever get the feeling that something is unnecessarily complicated?

Like when you were learning to use a computer and the instructor showed you 8 different ways to save a file?

Even though you only ever use 1 or 2 of them, those other 6 ways are looming there just to confuse and distract you.

To me, tungsten electrodes are kind of like that.

There are so many different kinds and sizes, you have to ask why? Especially since it only takes 1 or 2 kinds to get the job done.

For any type of automated GTAW, I say keep doing what works...

... and if you are concerned about thorium hazards, just take the appropriate measures to avoid breathing the dust.

... or better yet just order tungsten electrodes for your automated TIG pre-ground.

(did you even know you can order pre-ground tungsten electrodes from Diamond Ground?)

But for manual Tig Welding, If I had to choose only 2 tungsten electrodes, for me it would be 2% lanthanated and 2% thoriated.

That’s all I have ever needed.

Why not the others?

I am mainly interested in using as small an electrode as possible because there are times I need to make a really small weld or a weld on an thin edge...or right next to a pressed in bushing, where I need to get a good crisp start, pinpoint the arc, and not have nodules of tungsten spit in the weld.

And so , using an electrode that has good a good amperage rating is probably more important to me that most of the other characteristics like whether it balls up nicely on AC.

Some characteristics of types tungsten and why I like 2% lanthanated and 2% thoriated tungsten electrodes.

· Pure tungsten ball up really nice and smooth on AC and run ok on a flat surface or if you are trying to weld an outside corner joint and want to wrap the corners into the weld. But as far as their ability to carry amperage, they suck. You often have to go up one size electrode when you use pure…and if you are already using 1/8” , that might be as big as you have. I don’t know many people who keep 5/32” and 3/16” tungsten electrodes in their tool box. So that pretty much disqualifies pure tungsten for me.

· Zirconiated electrodes for AC aluminum carry a little bit more current than pure but not much. It balls ok, but there is not enough benefit to offset the lack of current carrying ability.

· Ceriated electrodes get a lot of favorable press but my tests did not impress me at the high end of a 3/32” electrodes range.

And if I had to choose only 1, it would probably be 2% lanthanated because of the way it holds up on the high end….That makes my life a little simpler.

So anyway, here is the test we did…

Using 2% ceriated, 1.5% lanthanated, 2% lanthanated, pure tungsten, and .8% zirconiated tungsten electrodes all in the 3/32” diameter, we put them to the test to see how well they held up at 200 amps.

According to the tungsten electrode chart above, 200 is top of the range for a 3/32 diameter electrode. So why push the envelope and see which ones actually hold up at 200 amps …even if it was for a little more than one inch of weld.

To start, we sharpened all the tungsten to a point using a CK turbosharp tungsten electrode sharpener. Then we welded for about an inch and quarter with each at 200 amps using a miller dynasty 200dx set at 100 hz and 65 percent electrode negative on the ac balance. Once the arc was struck, it was full pedal 200 amps.

Then we take a look at the previously sharp tips to see what happened.

Guess what? The 3/32” 2% lanthanated kicked ass and took names. Kind of surprised me too. I was expected the 2% thoriated to be a little better than the lanth but it was not.

Here is the run down on the rest..

2% Ceriated…had several nodules formed that made the arc unstable

1.5% lanthanated was about the same as the 2% ceriated….nodules and hemorrhoids.

2% lanthanated were the shizz at high amperage..being slightly rounded but uniform and very stable

The pure tungsten balled up into the fetal position as expected.

I thought surely the 2% thoriated would come out on top.

All of them did fine on DCEN at 200 amps and it surprised me that the 2% thoriated was the first to slightly round on the sharp point.

Now here is the thing…all of these different types of tungsten electrodes could be used at a lower amperage and on different machines and weld just fine. And all of them would probably weld pretty ok on a syncrowave 200 if you took the time to prepare the electrode by slightly rounding it on DCEP.

But inverters are quirky. They start at much lower amperages than the older style transformer machines. And besides one of the benefits to using a tig inverter is the ability to use a tapered electrode on AC for welding aluminum.

Before I tried 2% lanthanated, I used 2% thoriated for everything. But with all the talk about radioactivity of thorium dust, I thought I would give the 2% lanth a try. So if its safer, why not?

But for me…if all I have in the box is 2% thoriated, I am still happy.

One drawback to be aware of….

You cant break the lanthanated ….you have to grind it pretty thin before breaking it or it will bend or splinter. I don’t like that much but I am getting used to it. 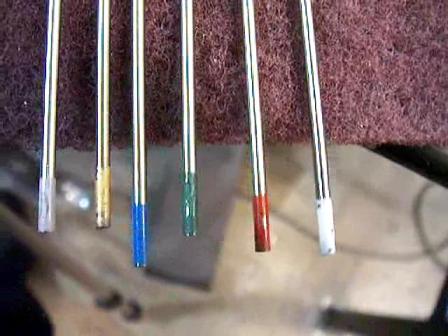 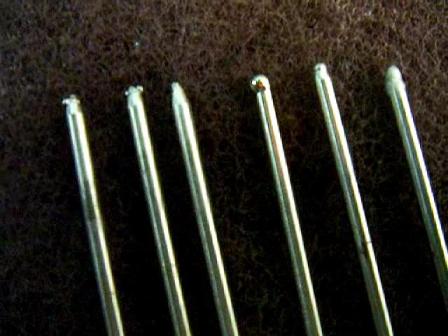